More Pictures of This Accident >>>

Hello, my name is Jeremy, and I live in Melbourne, Victoria, Australia.

So the story is, after midnight on May 8th 2012, I was leaving work on my way home, when a bunch of (I bet drunk) idiots in a Nissan X-Trail started throwing things at my 1996 Mazda Eunos 500 (not sold in America), stones, eggs, stuff like that, and then proceeded to tailgate me and follow me for a few kilometres. I got frightened and the only thing I could think of doing at the time was to flee.

So, stupidly, I put my foot down, and about a kilometre down the road I found myself on someones nature strip with an airbag in my face. I jumped out of my car and was surrounded by bits of what used to be my car, and had no idea what happened. All the residents of the surrounding houses came out and I was taken to hospital with a minor injury from the air-bag. That's it. Later it was found I had spun out on a corner, and slid into 3 small trees, which turned my car, the back end hit a power pole, and then I ended up on the other side of the road. I was doing around 160km/h (100mph). The tough structure of the car, the big motor took most of the brunt, and wearing a seat-belt is what saved my life and I am forever grateful I owned that car.

Lesson learnt: Do not speed, ever! I now live without a car as I can't afford another one, but that is no pain compared to the amount my parents would have endured if I died that night. As you can probably tell, my car was a total write-off, and rather surprisingly I got to keep my license. But I will always miss my car. Speed was the main cause of this accident, regardless of why I was speeding, that was why it happened.

Photos of my car the next day: 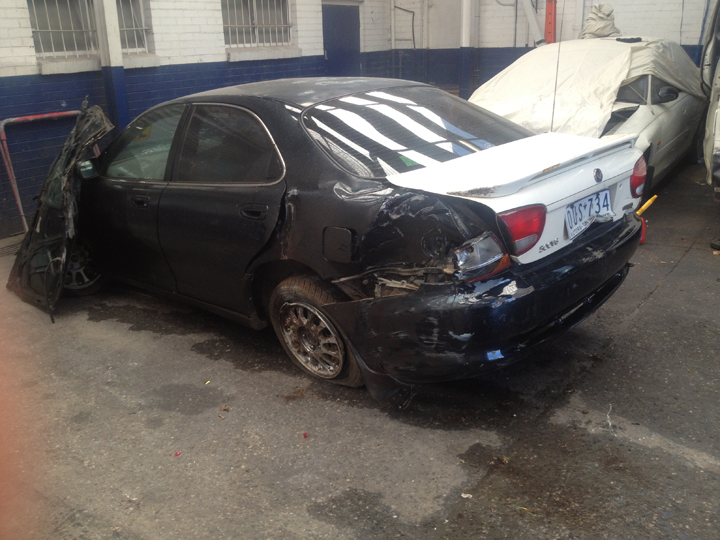